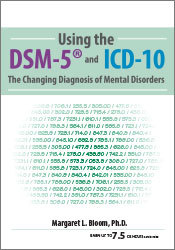 Using the DSM-5® and ICD-10: The Changing Diagnosis of Mental Disorders

Finally!  Resources that will help you navigate the changing diagnosis of mental disorders.

The DSM-5® manual, released in May 2013, requires substantial changes in the classification and diagnosis of mental disorders. These changes reflect the explosion of new information in psychopathology, neuroscience, and treatment over the past 15 years plus the need for a stronger link to the International Classification of Diseases (ICD).

This information-packed recording specifically emphasizes changes from the DSM-IV® to DSM-5®. You will walk through the DSM-5® manual and highlight the revisions, new diagnoses, and new specifiers that are most relevant to your daily practice. Information about the ICD-10, designated to be HIPAA’s official code book for mental disorders in 2015 will also be integrated throughout. Case examples and case studies will help you transition from making DSM-IV® multi-axial diagnoses (Axis I-V) to effective diagnosis with the DSM-5® and ICD-10 coding systems without axis.

This online program is worth 6.25 hours CPD.

Margaret (Peggy) L. Bloom, Ph.D., a licensed psychologist and NCC, is a Professor Emerita of Counselor Education and Counseling Psychology at Marquette University in Milwaukee, Wisconsin where she taught psychopathology, diagnosis and assessment and foundations of clinical mental health counseling. Previously she served on the faculties of Loyola University, Chicago, University of Memphis, Boston University, Overseas, and the University of Florida. Peggy is nationally recognized for her knowledge and expertise in assessment, DSM diagnosis and in counselor education. She is an appointed member of the Board of the Center for Credentialing & Education (National Board for Certified Counselors), an elected fellow of the American Psychological Association and a past-president of the Association for Counselor Education and Supervision. Peggy has published numerous journal articles and made professional presentations across the world.

Beginning with the introduction of the DSM-III-R, then the DSM-IV, and now the DSM-5®, Dr. Bloom has conducted DSM seminars across the United States for hundreds of psychologists, professional counselors, social workers and other mental health professionals. Peggy brings a unique interdisciplinary perspective to each DSM seminar. She began her career as a psychiatric nurse and earned graduate degrees in nursing, counseling, and counseling psychology. For a number of years she maintained a private therapy practice in addition to her university positions.

Financial: Margaret Bloom is a Professor of Counselor Education and Counseling Psychology at Marquette University. She receives a speaking honorarium from PESI, Inc.

Nonfinancial: Margaret Bloom has no relevant nonfinancial relationship to disclose.

Development of the DSM-5®

Changes in the Organization of the DSM-5®

Alignment with the ICD-10

The Schizophrenia Spectrum and Other Psychotic Disorders

Substance Use and Addictive Disorders

Coding Protocol from the DSM-IV® to DSM-5®

Case Study of conversion from a DSM-IV® diagnosis

This product is part of a bundles which includes special pricing as displayed below.
Just add my Product to the Cart Add Bundle to the Cart
Additional Participant CE
Additional Participant CE must be purchased for each additional viewer. These viewers will watch the video with the main registrant, but will have individual access to course handouts and certification. The standard price of this program includes certification for main viewer.
Ok

Satisfaction Guarantee Your satisfaction is our goal and our guarantee. Concerns should be addressed to support@psychotherapyexcellence.com or call 01235847393.